Cyril of Alexandria (d. 444) vs. Sola Scriptura as the Rule of Faith 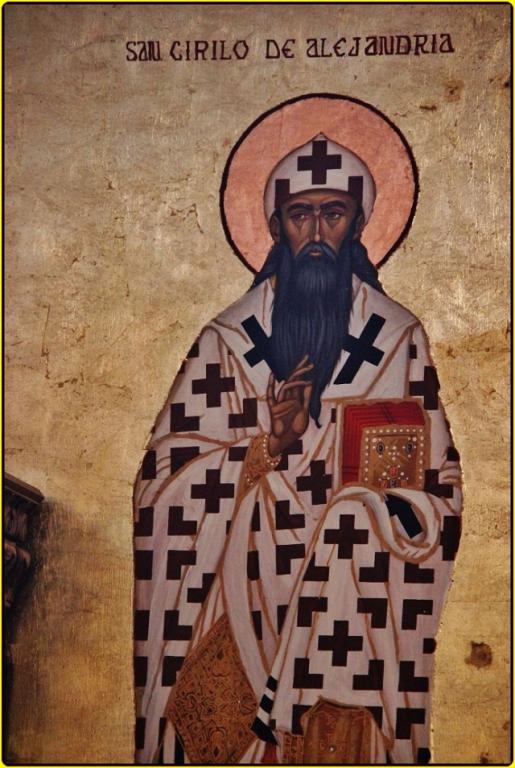 I shall be examining (in this series of papers) several Church fathers that Webster and King bring up, and documenting that they rejected sola Scriptura. I’ve already done this documentation with regard to Augustine, Athanasius, John Chrysostom, Jerome, Ambrose, Irenaeus, Justin Martyr, Clement of Alexandria, Hippolytus, Dionysius, Basil the Great, Cyril of Jerusalem, Theodoret, Gregory of Nyssa, Tertullian, Origen, Gregory Nazianzen, Epiphanius, Lactantius, Cyprian, Papias, Hilary of Poitiers, Pope St. Gregory the Great, and John Damascene.

That which the divine Scripture has not spoken, how shall we receive it, and reckon it among verities? (Glaphyrorum In Genesim, Lib. II. Translation by William Goode, Vol. 3, p.  181) [p. 124]

[Y]ou, O my friend, will adduce vain words to us, and heap up a cold and useless mass of notions, unless you should prove to us, that the volumes of the sacred writers agree with what you have spoken? (De SS. Trinitate Dialogus III. Translation by William Goode, Vol. 3, p. 182) [p. 125]

[I]t is necessary that we should follow the sacred Scriptures, in nothing going beyond what they sanction. (Ad Reginas De Recta Fide Oratio Altera. Translation by William Goode, Vol. 3, p. 184) [p. 127]

[I]t is impossible for us to say, or at all think anything concerning God, beyond what has been divinely declared by the divine oracles of the Old and New Testament (De Sacrosancta Trinitate, Cap. 1. Translation by William Goode, Vol. 3, p. 185) [p. 128]

[A]n exact and scrupulous knowledge of each particular matter we can obtain from no other source than from divinely-inspired Scripture. (Commentary on the Gospel of Saint Luke, Homily 55, trans. R. Payne Smith; Studion Publishers, Inc., 1983, p. 240) [p. 128]

Note (for what it’s worth), that Webster and King rely in all but the last citation above on translations of William Goode, who was an anti-Catholic, strong Protestant partisan (against whom I’ve partially devoted a book refuting sola Scriptura). Biases have been known to affect translation (even Bible translation: see example one / example two). I’m not saying we can question any or every rendering above, but rather, simply to keep in mind the likely bias of the translator. In any event, material sufficiency of Scripture is wholly consistent with Catholicism, and neither identical to, nor exclusive to, sola Scriptura. So all the examples above that Webster and King classify under “material sufficiency” prove exactly nothing as to St. Cyril’s alleged espousal of sola Scriptura.

It remains the case, as always, that one must examine what Church fathers stated regarding other means of binding, infallible authority within Christianity (besides Holy Scripture), to determine whether they hold to sola Scriptura.

St. Cyril of Alexandria believed in the authoritative, binding, infallible nature of the decisions of ecumenical councils:

And in no wise do we suffer to be shaken by any one, the faith defined, or the symbol of faith settled, by our fathers, who assembled, in their day, at Nicaea. Neither do we allow ourselves, or any other to alter a word there set down, or even to omit a single syllable, mindful of that saying: ‘Remove not the ancient land-marks which thy fathers have set.’  (Letter to John of Antioch, 5)

[H]e opposes the truth and the very symbol of the Church’s Faith, which the fathers once gathered together at Nicea through the illumination of the Spirit defined; he, fearing lest any should keep whole the Faith, instructed unto the Truth by their words, endeavours to calumniate it and alters the significance of the words, . . . against the holy fathers who have decreed for us the pious definition of the Faith which we have as an anchor of the soul both sure and steadfast, as it is written. (Tomes Against Nestorius: I, 5)

. . . the holy Churches in every region under Heaven, and the venerable Fathers themselves who put forth unto us the definition of the right and undefiled Faith, viz. (the Holy Ghost speaking in them) that the Word of God was made flesh and became Man, . . . (Tomes Against Nestorius: IV, 2)

St. Cyril held to the binding authority of apostolic tradition and Church teaching:

[H]old fast the faith in simplicity of mind; establishing the tradition of the church as a foundation, in the inmost recesses of thy heart, hold the doctrines which are well-pleasing unto God. (Festal Letters, Homily 8)

[T]he word of the truth contends on our side and the tradition of the undefiled Faith. (Tomes Against Nestorius: III, 3)

And he espoused the indefectibility and infallibility of the one true Church, with Peter (and popes) as the head:

He promises to found the church, assigning immovableness to it, as He is the Lord of strength, and over this he sets Peter as shepherd. (Commentary on Matthew)

‘I have raised him up a king with justice, and all his ways are right.’ The ways of Christ are right, and he has built the holy city, that is, the church, wherein also he dwelleth. For he abideth in the saints, and we have become temples of the living God, having Christ within us through the participation of the Holy Spirit. He, therefore, founded a church, himself being the foundation, in which we also, as rich and precious stones, are built into a holy temple, as a dwelling-place for God in the spirit; the church, having Christ for a foundation, and an immovable support, is perfectly immoveable. (Commentary on Isaiah, 4)

[T]he Catholic Church, which Christ Himself presented to Himself, has not the wrinkles of him who has compiled such things, but rather as unblemished, she keeps wholly without rebuke her knowledge of Him, and hath made full well her tradition of the Faith. . . . following the confessions annexed hereto of the holy Fathers, . . . (Tomes Against Nestorius: II, Introduction)

Therefore, by inexorable logical deduction and many expressly contradictory statements, St. Cyril of Alexandria did not believe in sola Scriptura. Webster and King have inexcusably misled their readers yet again. Bearing false witness violates the Ten Commandments and is, therefore, a grave sin. According to Revelation 21:8, habitual, unrepentant “liars” are among those who will receive the sentence of hell. So this is a serious business indeed. Christian teachers must — by God’s grace — teach the truth and make every effort to ensure that they are doing so. James 3:1 (RSV) warns: “Let not many of you become teachers, my brethren, for you know that we who teach shall be judged with greater strictness.”

Summary: St. Cyril of Alexandria did not believe in sola Scriptura, since he held to infallible ecumenical councils, an indefectible and infallible Church, and the binding authority of tradition.

March 1, 2021
Gregory the Great vs. Sola Scriptura as the Rule of Faith
Next Post

March 2, 2021 Rufinus (d. 411) vs. Sola Scriptura as the Rule of Faith
Recent Comments
0 | Leave a Comment
Browse Our Archives
get the latest from
Biblical Evidence for Catholicism
Sign up for our newsletter
POPULAR AT PATHEOS Catholic
1