Seidensticker Folly #72: Why an Eight-Week Fetus IS a Baby

Seidensticker Folly #72: Why an Eight-Week Fetus IS a Baby March 3, 2021 Dave Armstrong 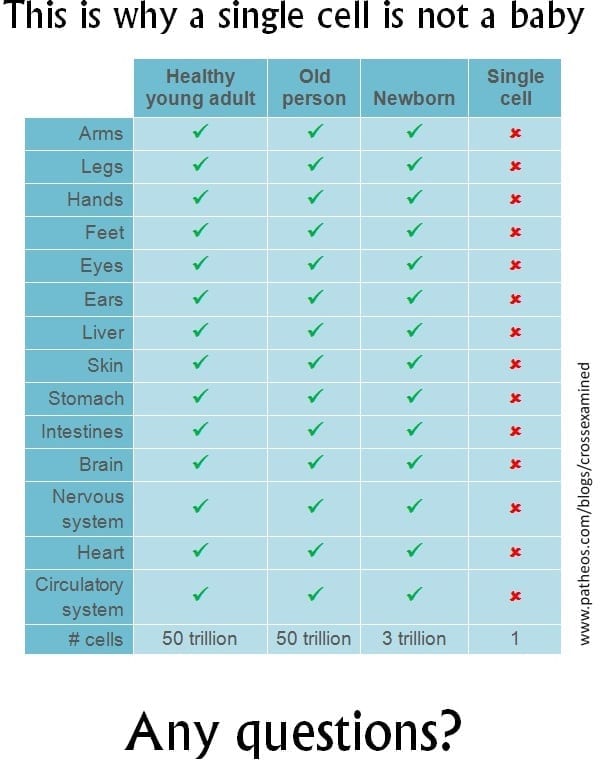 Bob’s cowardly hypocrisy knows no bounds. On 6-30-19, he was chiding someone for something very much like his own behavior: “Spoken like a true weasel trying to run away from a previous argument. You know, you could just say, ‘Let me retract my previous statement of X’ or something like that.” Yeah, Bob could!  He still hasn’t yet uttered one peep in reply to — now — 71 of my critiques of his atrocious reasoning.

I am responding to Bob’s post entitled, “Why a Single Human Cell is Not a Baby” (3-1-21; recycled from a post of 9-14-16). The entire post consists of the graphic chart above, followed by “Any questions?”

The first thing one notices (well, if one is pro-life), is (for inexplicable reasons) the absence of DNA on this list of features of human beings (and non-features of a newly fertilized cell of a human being). There is, I submit, a very good reason for that. The DNA that a human being will utilize for his or her entire life is already present in this fertilized cell. And it seems to me that that, too, is a key element of the human and personal identity of a human being / person. It makes us unique and is our “code” or ultimate identifying mark. Science verifies this:

Although life is a continuous process, fertilization is a critical landmark because, under ordinary circumstances, a new, genetically distinct human organism is thereby formed…. The combination of 23 chromosomes present in each pronucleus results in 46 chromosomes in the zygote. Thus the diploid number is restored and the embryonic genome is formed. The embryo now exists as a genetic unity. [Ronan O’Rahilly and Fabiola Müller, Human Embryology & Teratology. 2nd edition. New York: Wiley-Liss, 1996, pp. 8, 29.]

Almost all higher animals start their lives from a single cell, the fertilized ovum (zygote)… The time of fertilization represents the starting point in the life history, or ontogeny, of the individual. [Bruce M. Carlson, Patten’s Foundations of Embryology. 6th edition. New York: McGraw-Hill, 1996, p. 3]

This is why pro-lifers believe that the newly fertilized egg or zygote is already (in essence) the person they will develop into after birth. The DNA (which determines so much) is present, and secondly, there is no other starting-point that isn’t completely arbitrary (and, I would add, scientifically and philosophically ludicrous, before we even get to religious belief and legal / societal “rights”). It’s the same person in the sense of inexorable development; just as an acorn may be said to not be an oak tree; yet every oak tree was once an acorn. In that sense, the acorn is an oak tree: just at a very early stage of development (a “baby oak tree” so to speak). Yet Seidensticker completely ignores DNA as any sort of important identifying human characteristic, which is immediately absurd.

The argument above is, “look at all these things that a single-cell human doesn’t possess! Therefore, how could anyone call this a human being? We do based on what I just explained: the only rational beginning-point of a new unique human being, and DNA, as well as the fact that all that this single cell needs is time to become everything that born human beings are or will be. It’s all there.

So people (perhaps knowing these things, at least upon reflection or being confronted with them), pivot over to an argument from viability: “it has to be able to live on its own.” But lots of born human beings can’t do that without help from other human beings. In fact, a born baby cannot, for a very long time (maybe two, three years old). Others are dependent on medicine or kidney dialysis, and so forth. Yet we don’t say they cease to be human beings because of that.

My central point in writing this article is to note that all of these traits in the chart above do apply to an eight-week-old embryo. So, even if we can’t convince the person who favors legal abortion that the single-celled human is a human being, entitled to the right to life, we ought to be able to convince them that (at least) an eight-week-old fetus is identifiably human and a person: by the same means that the chart above utilizes in order to argue that the single-celled fertilized zygote is not.

The usual means of determining the end of life are heartbeat and brain waves, right? (especially the first, which can be immediately detected). Human embryos have beating hearts “four weeks after conception,” (28 days) according to the Mayo Clinic: “Pregnancy week by week“. According to neuroscientist Katrina Furth, “Fetal EEGs: Signals from the Dawn of Life”, brain waves have been detected at “45 days after conception” (just seven weeks and three days). So by the early 8th week from conception (which is usually called the tenth week of a pregnancy), both these features that determine death in hospitals and ambulances, are present in the human embryo.

By eight weeks after conception, as the pictures in the Mayo Clinic article demonstrate, a human embryo possesses all the outward characteristics from Seidensticker’s chart: arms, legs, hands, feet, eyes, ears, and skin (as well as nose, mouth, fingers, toes, elbows, and knees). So when do the internal systems (apart form the brain and heart, which we’ve covered above) begin?:

Liver: As far as I can make out from a very technical scientific description, this seems to be completely developed by eight weeks.

Stomach: the same resource on embryology [in a separate article] places the origin of the stomach in the “4th week”.

Intestines: the same article holds that the intestines also are present by the 4th week.

Nervous system: the article from Embryology.med on this topic states that this system is in place by the 8th week.

That means that every characteristic in the above developmental chart is present in human embryos by eight weeks after conception. So the relevant and obvious question to ask Bob (who has ignored — in his intellectual profundity and glory and self-evident courage — my 71 previous critiques) and those who think like him is: “Why isn’t an eight-week-old human embryo a person (or a “baby”)?” If the chart supposedly proves that a single-celled human being right after fertilization is not a “baby” at that stage (lacking all those characteristics), then our analysis (using exactly the same criteria) proves that an eight-week-old fetus is a “baby”: since it has all of them: most notably, a heartbeat and brain waves: present at four weeks and 7 1/2 weeks.

Summary: Atheist and advocate of legal abortion Bob Seidensticker produced 14 characteristics (omitting DNA) that a newly fertilized single-cell lacks. All are, however, present by eight weeks.

March 4, 2021 Marshall, Keating, & Lawler: Exchanges Re Pope Francis
Recent Comments
0 | Leave a Comment
Browse Our Archives
get the latest from
Biblical Evidence for Catholicism
Sign up for our newsletter
POPULAR AT PATHEOS Catholic
1