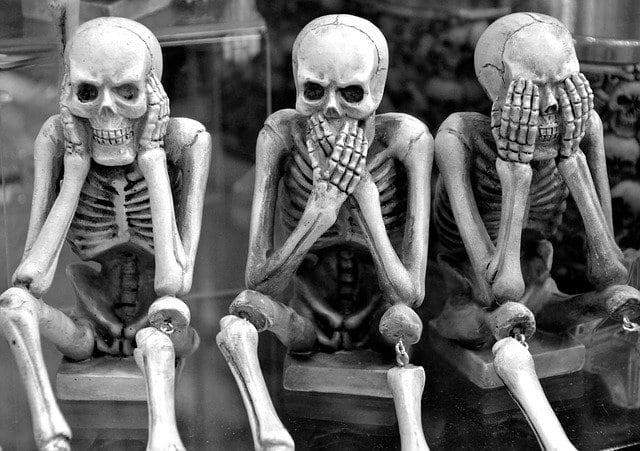 Bob’s cowardly hypocrisy knows no bounds. On 6-30-19, he was chiding someone for something very much like his own behavior: “Spoken like a true weasel trying to run away from a previous argument. You know, you could just say, ‘Let me retract my previous statement of X’ or something like that.” Yeah, Bob could!  He still hasn’t yet uttered one peep in reply to — now — 64 of my critiques of his atrocious reasoning.

Today’s critique is a case study in a person who is utterly unwilling to be instructed (certainly not by one of us lowly, ignorant Christians!). I observed Bob railing about supposed unresolvable contradictions in Ten Commandments accounts in the Bible, in one of his comboxes. In this instance, a Christian (“Scooter”) was there trying to talk sense into Bob, who would have none of it. Undaunted, he simply kept up his pitiable anti-Bible polemics and rhetoric:

Read Exodus 34. This is Moses getting the second set of tablets (remember that he smashed the first set).

Ex. 34:28 says: “Moses was there with the Lord forty days and forty nights without eating bread or drinking water. And he wrote on the tablets the words of the covenant—the Ten Commandments.”

Scooter: I note that quite often your responses suffer from the “I’ve got my mind made up, don’t confuse me with the facts” syndrome. So I encourage you to read Deuteronomy 5 again that debunks the idea that there were 2 different sets of Commandments. (11-21-20)

As Greg noted, don’t whine to us about who has his mind made up.

Ex. 20 and 34 have two very different sets of 10 Commandments. Or is God’s holy word something that you don’t bother reading or understanding?

The Documentary Hypothesis very neatly explains this and other conflations of two stories in the Bible (Flood, Creation, and others). (11-21-20)

Scooter: The Documentary Hypothesis and the arguments that support it have been effectively demolished by scholars from many different theological perspectives and areas of expertise. Read Ex.34 verse one very carefully. (11-21-20)

Since you refuse to address my point about the 2 incompatible versions of the 10 Commandments in the same book of the Bible, I’ll assume that you agree that it’s a problem.

As for the Documentary Hypothesis, it has been tweaked, but the core idea is unchanged: the Pentateuch that we have is the mixing of a number of different traditions. If you want to attack this, give me a reference. (11-22-20)

Proverbs 1:22 (RSV) How long, O simple ones, will you love being simple? How long will scoffers delight in their scoffing and fools hate knowledge?

Proverbs 13:16 In everything a prudent man acts with knowledge, but a fool flaunts his folly.

Proverbs 15:14 The mind of him who has understanding seeks knowledge, but the mouths of fools feed on folly.

Proverbs 26:11 Like a dog that returns to his vomit is a fool that repeats his folly.

Sirach 21:18 Like a house that has vanished, so is wisdom to a fool; and the knowledge of the ignorant is unexamined talk.

2 Timothy 3:7 who will listen to anybody and can never arrive at a knowledge of the truth.

This is Bob’s problem. He won’t accept any instruction or even clarification from Christians. He knows all. He knows better than Christians (even scholars) who have devoted their lives to studying and understanding the Bible. He thinks that he’s virtually infallible (judging by his constant words and actions), when it comes to the Bible and Christian theology, even though he himself at least honestly admitted (2-13-16): “My study of the Bible has been haphazard, and I jump around based on whatever I’m researching at the moment.” How impressive . . .

I thoroughly refuted his “two contradictory sets of Ten Commandments” schtick over two years ago: Seidensticker Folly #16: Two Sets of Ten Commandments? A person who was confident of his positions and interested in open-minded, interactive dialogue would have welcomed such an opportunity.

But because Bob refuses to learn anything about the Bible (or read or respond to any of my 65 critiques), he simply repeats his same old stupid errors. He has no interest whatsoever in constructive dialogue. This is (to put it very mildly) not an impressive or constructive intellectual “place” to be. The true thinker is always willing to dialogue, be corrected, and learn. It’s the blind leading the blind. Bob offers up yet more slop on almost a daily basis, and his sycophants and cheerleaders sop it up, no matter how noxious or toxic his “stew” is.

All we Christian apologists can do is offer reasonable counter-explanations and refutations and shake our heads at the silliness and sheer impervious irrationality of what goes on on a regular basis at Cross Examined and many other anti-theist “bubble” venues like it (such as John Loftus’ Debunking Christianity site).