The Bronze Serpent: Example of Proper Use of Images 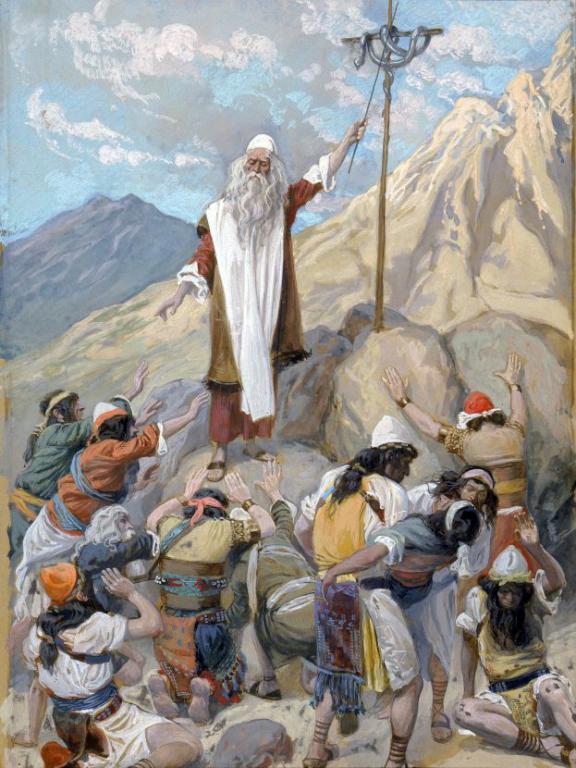 Chapter 12 of my book, Biblical Evidence for the Communion of Saints (Feb. 2012)

Numbers 21:6-9 (RSV) Then the LORD sent fiery serpents among the people, and they bit the people, so that many people of Israel died. [7] And the people came to Moses, and said, “We have sinned, for we have spoken against the LORD and against you; pray to the LORD, that he take away the serpents from us.” So Moses prayed for the people. [8] And the LORD said to Moses, “Make a fiery serpent, and set it on a pole; and every one who is bitten, when he sees it, shall live.” [9] So Moses made a bronze serpent, and set it on a pole; and if a serpent bit any man, he would look at the bronze serpent and live.

2 Kings 18:4 He removed the high places, and broke the pillars, and cut down the Ashe’rah. And he broke in pieces the bronze serpent that Moses had made, for until those days the people of Israel had burned incense to it; it was called Nehush’tan.

These passages teach us many things. Iconoclastic Calvinists (i.e., those who oppose all use of images whatever in Christian worship or piety) argue that they can never be used, and that their use always constitutes “idolatry” regardless of one’s intentions or inner state of mind. But these two Bible passages establish many “Catholic” elements (ones anathema to many Protestants):

1) Moses could “atone” for the people. They were being judged by God, but the mere prayers of Moses were able to stop that. His prayers, therefore, had more power than the prayers of any old person in the Hebrew community. Yet many Protestants deny this, in direct opposition to not only this passage, but also James 5:16b (citing the example of Elijah in context): “The prayer of a righteous man has great power in its effects.”

2) The bronze serpent not only is a foreshadowing of Christ on the cross (John 3:14: “And as Moses lifted up the serpent in the wilderness, so must the Son of man be lifted up”), but also an instance of a “sacramental” aid: use of a physical thing in order to grant more grace or spiritual power or pardon. The people had to do something: look at the serpent — not merely abstractly believe that God would pardon them.

3) It shows, moreover, that visual aids in receiving pardon and life (by analogy, salvation) from God are perfectly permissible: indeed, expressly commanded by God in this instance.

4) Thus, there is an image that is not a “graven image” — forbidden by the Ten Commandments. Not all images in spirituality and worship are bad and wicked by their mere existence, apart from how people use them.

5) 2 Kings 18:4 again reveals to us that it was not the image itself that was inherently wrong, but a corrupt use of it. The proper use was explained by God in the earlier passage. The improper, sinful, wicked use was burning incense to it, because that implies that it is an idol, with the power of God. It then replaces God in a way that it did not in its proper use and becomes an idol: precisely due to how people regard it: not in and of itself, by its own essence. This shows that idolatry is a matter of the intentions of the ones engaging in the sin.

6) The same principle is also illustrated by the Temple itself: it was the house of God only so long as the Hebrews followed God’s commandments. Thus, three Temples were built, and three were destroyed in judgment after the Jews had sunk into idolatry. The Temples had ornate visual ornamentation, including large statues of cherubim and other paintings of symbols. Those were not idols as originally intended, but when the Jews went astray, the inner meaning of the Temple was corrupted and God was all too willing to destroy His own “house.” Solomon’s Temple (1 Kings 6:23-35) had been approved by God (“I have consecrated this house which you have built” — 1 Kings 9:3). The prophet Jeremiah expressly states this notion: