Creation, evolution, the Fall and more in a new Noah clip

Creation, evolution, the Fall and more in a new Noah clip May 10, 2014 Peter T. Chattaway 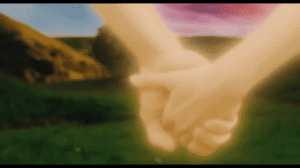 Six weeks after Noah came out in theatres, the filmmakers have released another clip — and it’s one of the best sequences in the entire film. The Creation sequence begins with a single shot that captures billions of years of evolution, from the Big Bang to the mammals that existed just before humanity came along, and it goes on to show the Fall, Cain killing Abel, and the violence that has continued throughout human history right up to the present day. You can watch the video — and read a few thoughts I have about the significance of this clip — below the jump.

First, the video itself:

A few points are worth making here.

First, it is striking to see how the film reconciles the biblical and scientific accounts of Creation — and how it bends the biblical text, which was written within a particular ancient cosmology, to fit the current scientific paradigm.

I especially like the way the “firmament” that God created on the second day is reinterpreted here as the “substance and shape” that the “formless light” began to take on immediately after the Big Bang. The ancient Hebrews understood the “firmament” as a sort of barrier in the heavens that kept the water out, while the film defines “substance and shape” as the formation of galaxies, stars and planets — but in both cases, the basic meaning is the same: the bringing of order out of chaos.

It is also interesting to see how the film sometimes revises the biblical chronology and sometimes doesn’t. For one thing, it switches the third and fourth days, so that the sun and moon are now created before the land is separated from the oceans — but Noah’s narration sticks to the biblical chronology when it comes to the creation of animals, so that fish and birds are created on the same day but the land animals come later.

Some people might slam this film for revising the biblical order of things, but I think it’s worth noting that even films that have been very popular with evangelical audiences — such as last year’s mini-series The Bible, or the prologue sequence that was added to the Campus Crusade Jesus film several years ago — have moved the sun, moon and stars to an earlier point in their own Creation sequences.

Second, as my friend Steven D. Greydanus has pointed out, the emphasis in this film — and in this sequence — is on the glorious nature of Creation before mankind came along, which is not quite how the Bible tells the story.

In Genesis 1, each of the things God creates is “good”, but it isn’t until after he makes mankind that Creation is deemed “very good”. In the film, on the other hand, the emphasis is on how the world without mankind was “a jewel in the Creator’s palm,” and how mankind ruined it shortly after we came into existence.

To what degree this reflects the jaundiced view of Noah, the character, rather than Noah, the film, is a point to consider.

Third, the tension between evolution and creation in this sequence — summed up, perhaps, by the way the film clearly presents Adam and Eve as specially created beings of light, rather than the next generation of hairy mammal — has interesting implications for the film’s vegetarian message.

We’ve talked before about the fact that God, in the Bible, does not permit humans to eat meat until after the Flood. But director Darren Aronofsky has taken this idea even further in recent weeks — in presentations here and here — and stated that the animals in the Garden of Eden didn’t eat meat either.

There is certainly a basis for this in the Judeo-Christian tradition. Hebrew prophets like Isaiah looked forward to the day when “the wolf and the lamb will feed together, and the lion will eat straw like the ox, and dust will be the serpent’s food”.

The thing is, modern scientific evolutionary theory absolutely assumes the existence of carnivorous activity. The consumption of other animals is absolutely built into the digestive systems of many species, including our own.

Things arguably get even more complicated when you consider how the Noah of this film consistently defines the animals as “innocent”, versus the wickedness of the humans, because — as Ila puts it in a clip that was first posted two months ago — the animals “still live as they did in the Garden.”

Does this mean that none of the animals in this film are carnivorous themselves? Did some of the animals only become carnivores after the Flood? Is our current world even more fallen than the world of Noah’s day?

I’m not sure the film knows how to resolve all these tensions. But I do like the way it stirs them up and gets us to think about them.

Finally, I seem to recall, from viewing the film in the theatre, that there is a pinprick of light at the centre of the screen just before the Big Bang happens — but I can’t make it out on my laptop, even when I stream the clip at the highest resolution possible and play it fullscreen. I wonder if it will be noticeable on the Blu-Ray.

Oh, and I get a kick out of the fact that the entire screen goes black when Noah covers the glowing bowl. I mean, there is a furnace right behind him.

May 9, 2014
Noah news round-up: a Chinese ban and a popular name
Next Post

May 10, 2014 Roberto Orci: the first Trekkie to direct a Star Trek film?
Recent Comments
0 | Leave a Comment
Browse Our Archives
get the latest from
FilmChat
Sign up for our newsletter
POPULAR AT PATHEOS Entertainment
1