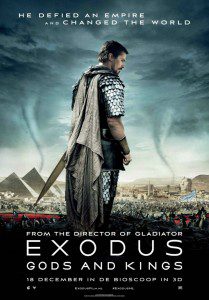 Time to round up some Exodus: Gods and Kings bits.

First up, Flicks and Bits has this poster for the film’s Dutch release, which will apparently take place on December 18 — fifteen days after the film opens in South Korea, and six days after it opens in North America. It’s not a great poster, but it’s less lame than some of the other ones we’ve seen. (One of the most recent posters, which seems to show Moses and Ramses fighting each other even though they aren’t even looking at each other, is particularly strange.)

Second, Sigourney Weaver was interviewed by her old friend (and Dave co-star) Kevin Kline for Gotham magazine, and along the way she drops a few hints about how Queen Tuya, her character in Exodus, tries to influence her son Ramses:

KK: Tell me about the new film. Is this the biblical Exodus or the Leon Uris Exodus?
SW: It’s the biblical one, and I play Tuya, the wife of one of the pharaohs. My son is Ramses the Great, played by Joel Edgerton. John Turturro is the Pharaoh Seti. I’m not his favorite wife, but I’m the mother of the prince. To keep my power, I need my son to become pharaoh. Moses, played by Christian Bale, is the golden boy. He makes my son look impulsive and small-minded. Through the whole movie, in basically every scene I have, it’s: “Kill Moses.” “Why didn’t you kill Moses?” “For crying out loud, will you please kill Moses!”
KK: It must have taken five minutes to make you into an Egyptian queen.
SW: My dear makeup artist, Linda DeVetta, transformed me. I had the most beautiful costumes by Janty Yates. They found these craftspeople I haven’t worked with since the last time I worked with Ridley [on 1492: Conquest of Paradise]. They took scarab beetles and peacock feathers and made them into a headdress for me. It’s mind-boggling the things I paraded around in.

KK: Do you think Ramses would be king in spite of his mother or because of her?
SW: I have a lot to do with him becoming Ramses the Great. Even though he doesn’t do what I say, he knows I’m right. At a certain point, he realizes it.
KK: His willful disobedience shows a certain kind of power, doesn’t it?
SW: That’s true.
KK: What parts of the role have had the most personal resonance for you? What aspect of your own personality were you able to draw upon for the role?
SW: Well I do love eye makeup.
KK: [Laughs] So that was your connection to the character?
SW: Have you ever done an ancient epic?
KK: I played Prometheus in college, but on the screen, no. Is the historical fiction in the script the backstory?
SW: You don’t feel like you’re in a biblical epic. It’s accessible. They were focusing on the relationships.
KK: So it’s relevant?
SW: I think it is. I’m only in court, a woman without any power, but someone who is pretending she’s the most powerful woman in Egypt. And her son doesn’t even listen to her! I don’t get to go on the chariots or on the Red Sea parting, [but] it’s going to be everything you want a Ridley Scott movie to be—gorgeous, suspenseful, out there.

KK: Reports say you have some va-va-voom costumes.
SW: They certainly are va-va-voom, because they wanted me to be a total sexpot. And it’s a waste, because all my energy is going into my son.
KK: In the movie is your husband actively rapacious?
SW: He seems so pro-Moses. He knew that if he were to let me through his door, all I would do is say, “Kill Moses.” I found it very interesting to play someone in a court. There’s a lot of politics, and we don’t live like that, though occasionally, we’ll be out at a party in Hollywood and I’ll think everyone is playing a role.

Did you catch the part where Weaver says her character has “a lot to do with” her son “becoming Ramses the Great”? I cannot help but wonder if that supports my theory that Tuya will kill her husband to make Ramses Pharaoh, the same way Commodus killed his father to prevent Maximus from becoming the Emperor in Gladiator.

Third, the Los Angeles Times has a short interview with costume designer Janty Yates, accompanied by pictures of her design for Ramses’ gold armour and a photo of Joel Edgerton wearing it (minus the headpiece, which I haven’t seen in any of the photos from this film; in the ads, he wears something shorter and made of gold): 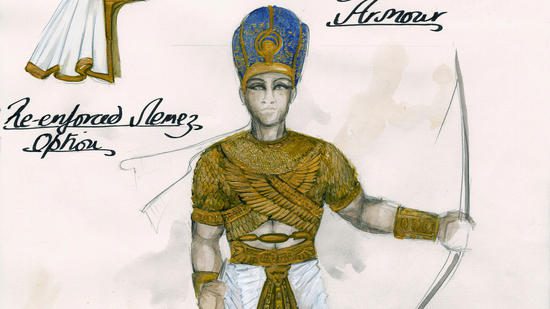 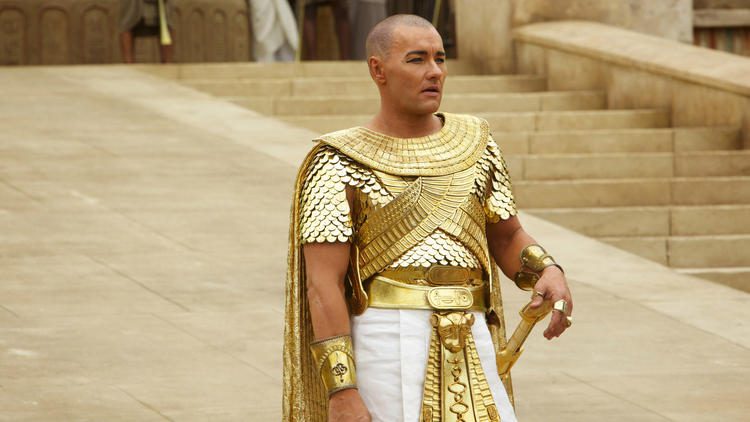 Fourth, we have the usual batch of new pictures via the film’s Facebook page: 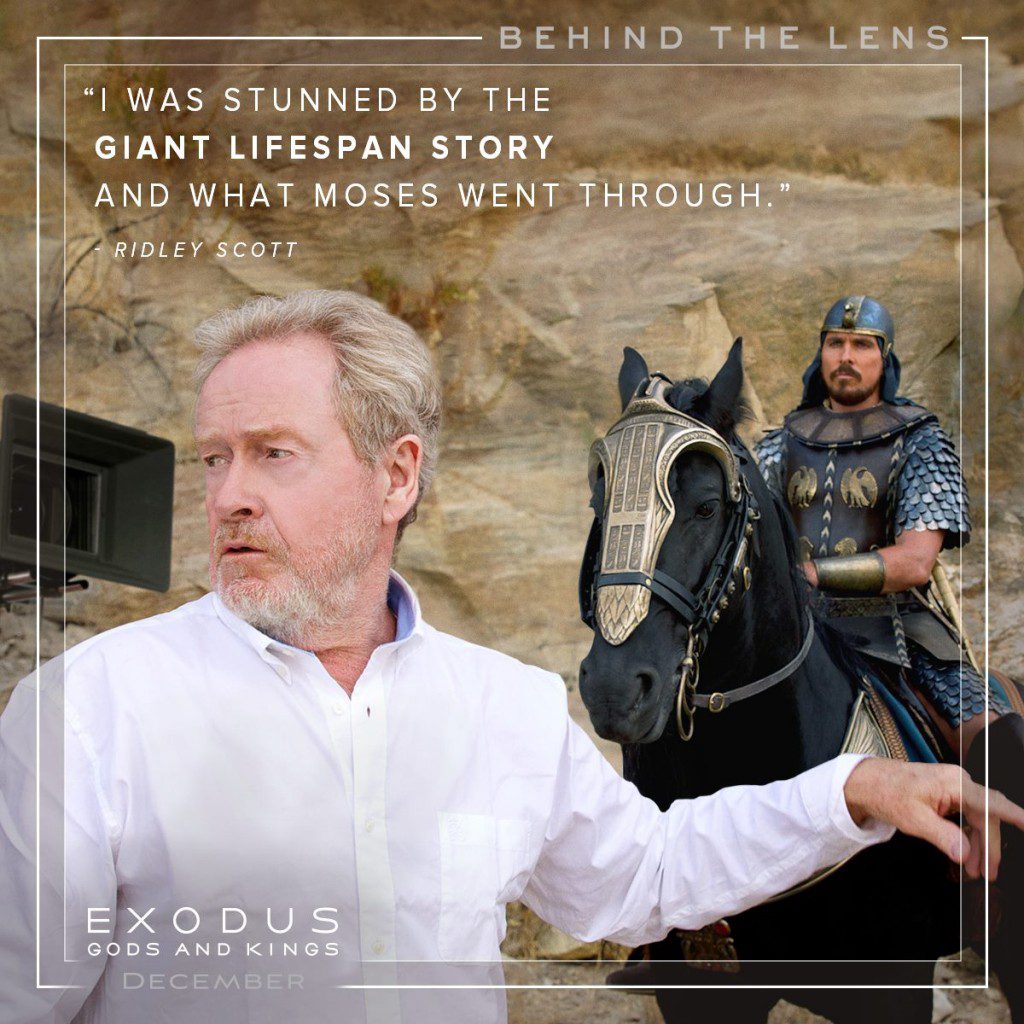 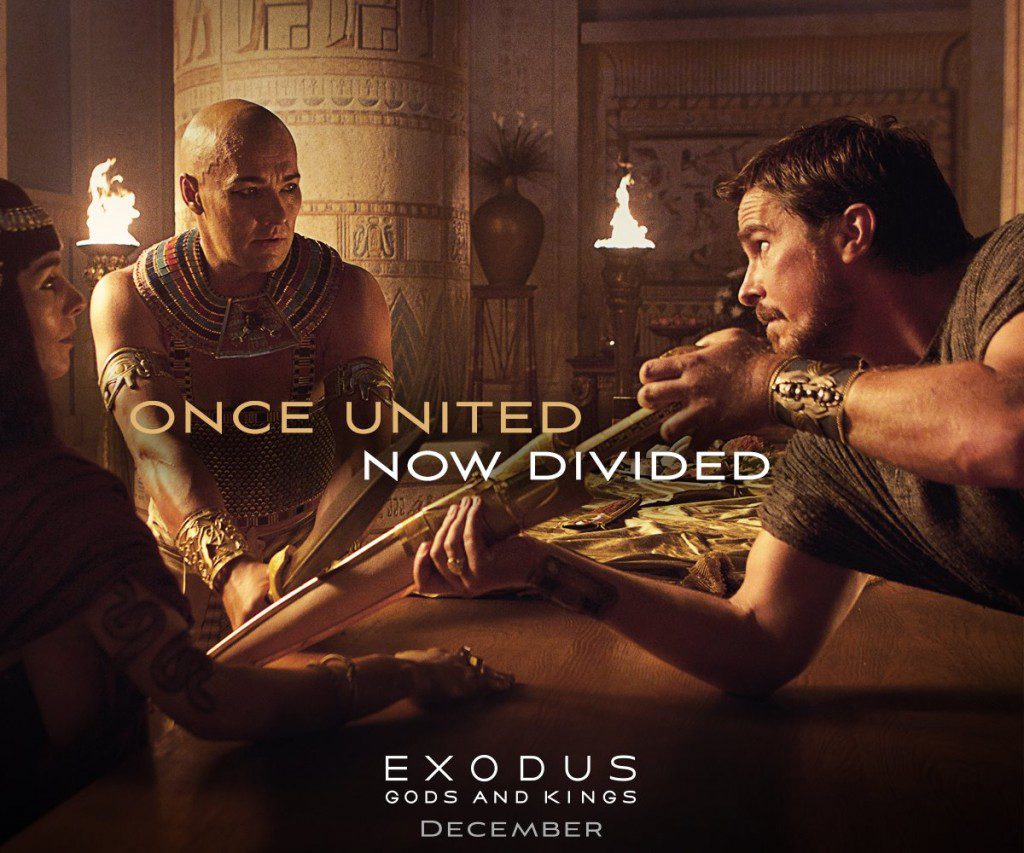 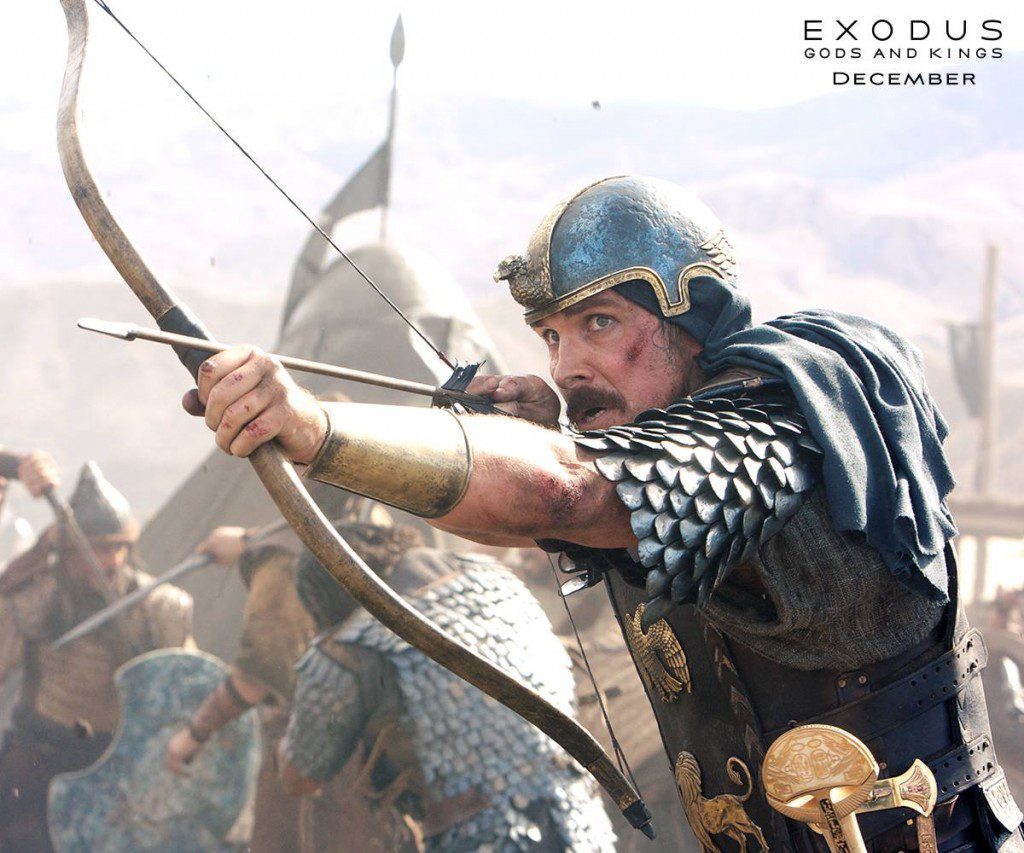 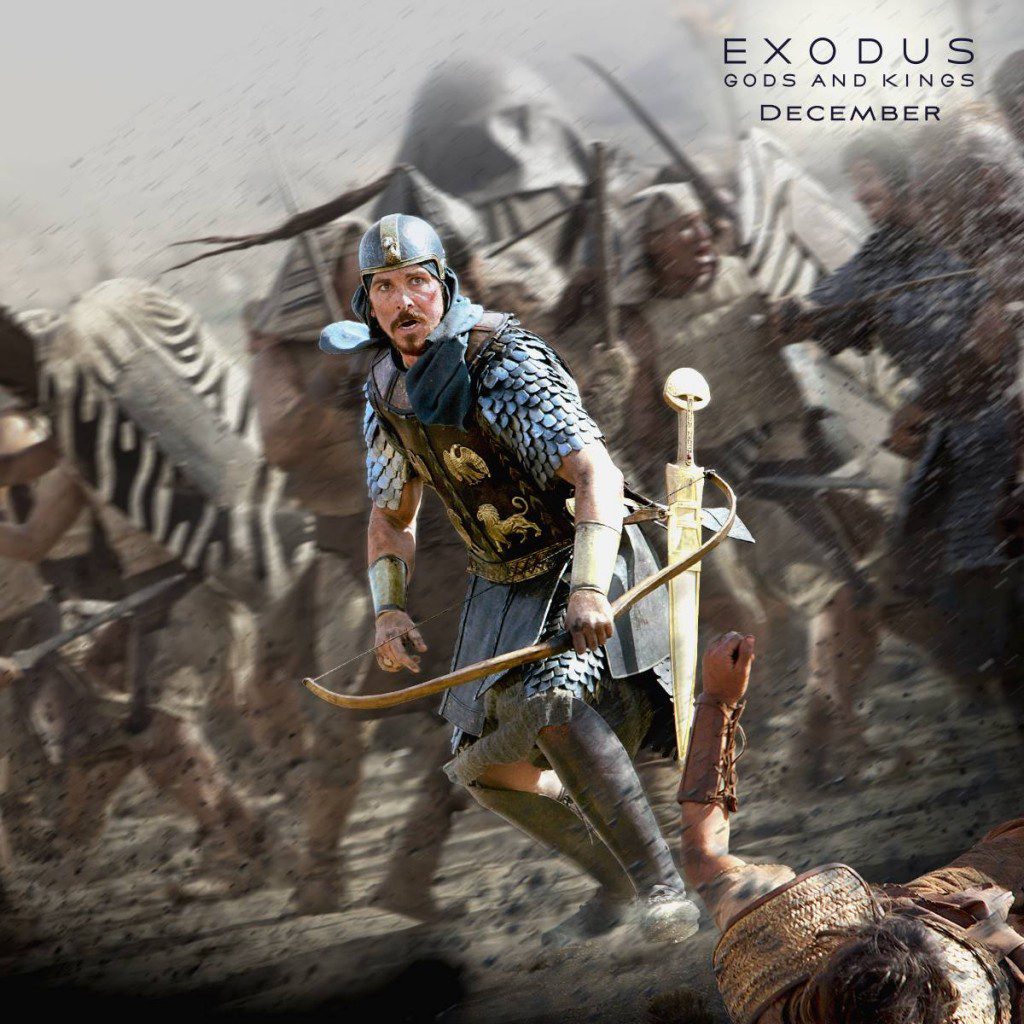 And finally, we have the latest video that is really just a glorified GIF (in fact, it looks just like a GIF that was posted back in August, but now it has sound):

November 5, 2014
Our first look at the cast for The Bible follow-up series A.D.
Next Post

November 8, 2014Exodus: Gods and Kings: new footage of Moses, Ramses and Zipporah in a featurette on the 3D photography
Recent Comments
0 | Leave a Comment
"I have neither noticed that much. I recenty read a leadership book inspired from Cyrus ..."
Hamid Mortazavi Cyrus the Great — a Persian ..."
""AD" stands for "Anno Domini", a Latin expression meaning "In the Year of Our Lord".So ..."
Peter T Chattaway The Chosen — season one, episode ..."
"Why does it say at the start of episode 3 that it takes place 26 ..."
Desiree Chamberlain The Chosen — season one, episode ..."
"What about Hellboy, The Grudge, Ghoulies, and Anaconda?"
45th Spiderbob Group VGCP When R-rated franchises go PG-13 …
Browse Our Archives
get the latest updates from
FilmChat
and the Patheos
Entertainment
Channel
POPULAR AT PATHEOS Entertainment
1