Watch: Exodus: Gods and Kings imagines what it would be like if the plagues came to modern-day cities 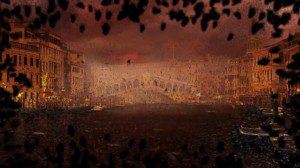 Give the publicity team behind Exodus: Gods and Kings points for creativity. The latest batch of videos asks you to imagine what the plagues would look like in modern-day cities such as London, Moscow, San Francisco and “Suburbia” — which is an interesting way of getting us to imagine what it might be like to sympathize with the Egyptians. Check ’em out below the jump.

In London, the water turns to blood:

In Washington DC, the plague of frogs:

In Auckland, the plague of gnats:

In Venice, the plague of flies:

In Patagonia, the plague of diseased livestock:

In Chicago, the plague of boils:

In Moscow, the plague of hail:

In Sydney, the plague of locusts:

In San Francisco, the plague of darkness:

And, in “suburbia”, the death of the firstborn:

December 12 update: Now you can watch all ten plagues in a single video:

December 10, 2014
Ewan McGregor on playing Jesus -- or, rather, Yeshua -- and the Devil in Last Days in the Desert
Next Post

December 11, 2014 Golden Globes nominate Patti Smith's 'Mercy Is' from Noah
Recent Comments
0 | Leave a Comment
"This was a refreshing read. I'm an average fan of Hellboy but I'm also a ..."
Andrew Mathews Doug Jones on Hellboy and Christianity.
"Great interview! One thing I've wondered since watching Season 1 is why they didn't include ..."
A.J. Cattapan Interview: The Chosen writer-director Dallas Jenkins ..."
"Earth actually does exist in the Dark City universe. Early in the film when John ..."
Edward Clint Dark City and the ambiguous ending.
"I don't always agree with your opinions, but your reviews are never less than interesting ..."
Laura-Lee Rahn The top-grossing Italian movie of 2019: ..."
Browse Our Archives
Follow Us!