Exodus: Gods and Kings interview round-up (with photos and video): Christian Bale on Moses’ “sadistic” side and making Moses accessible for believers and skeptics alike 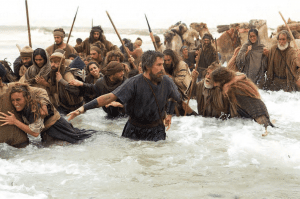 Time to round up some Exodus: Gods and Kings interviews.

First, Entertainment Tonight has a few brief soundbites from Christian Bale, in which, among other things, he makes the first public comments I have heard him make on the controversy over the casting of Caucasians in the key roles.

ET also has some behind-the-scenes footage of Bale as Moses shouting “You’ll never make it back! We will not harm you!” — to Egyptians fleeing the Red Sea tsunami, perhaps? — and, even more interestingly, they have a shot in which we can hear the 11-year-old boy who’s playing the voice of God call to Moses as “Moshe, Moshe.”

Here is the ET report itself:

Next, Empire magazine has a new feature on the film, in which Bale makes some interesting comments about his first experience reading the Torah:

“The first thing that surprised me was how human not only Moses is but God is as well,” he says. “They fight, they have bust-ups. It’s almost like God has to prove himself. And it’s bloody violent. Egypt is really a fascist state. Pharaoh (Joel Edgerton) is believed to be a god, so he’s brazen and has a very harsh outlook on life. And this is a place where life is very cheap. I wouldn’t bloody last a second.”

The result was some pruning, for length reasons as much as to avoid a celluloid bloodbath. “There was talk about how much we could tell, but for a start, we’d end up making a six hour-long film. There are these hideous massacres that happen later on in Moses’ life, and you don’t get that. [The Bible’s] not for kids. It really isn’t. I wouldn’t want my daughter reading it.”

Ridley Scott also makes a comment that suggests he’s still blurring the lines between history and fiction somewhat (the Bible never specifies that Ramses was the Pharaoh of the Exodus, much less that he and Moses were “close”):

“(Exec producer and former Fox head) Peter Chernin sent it to me,” Scott says. “At first my reaction was, because of the subject matter, ‘Well, that’s not really for me.’ But then I began to read it and I was stunned about how little I knew. As I read, I got more and more engaged. Moses was this tough guy, a real character. A military leader and a prince who would never be on the throne, but who was a close friend of Ramses The Great. I wanted to add a caption at the end of the movie saying that he lived to 96 and had many wives and over 200 children. To emphasise that these were real people. You can see Ramses II’s remains if you want to, they’re in New York or Cairo. I think so often with these movies, people think they’re fabricated.”

The article also comes with some new photos: 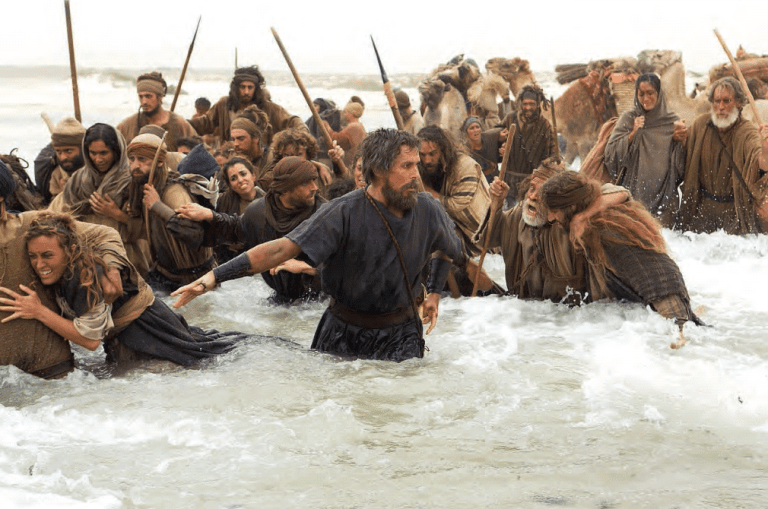 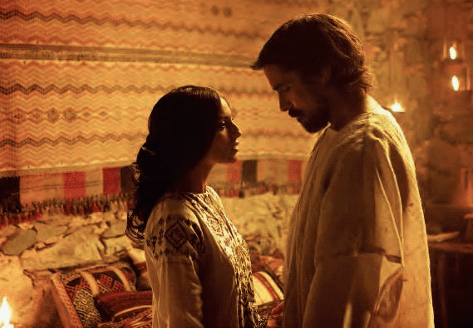 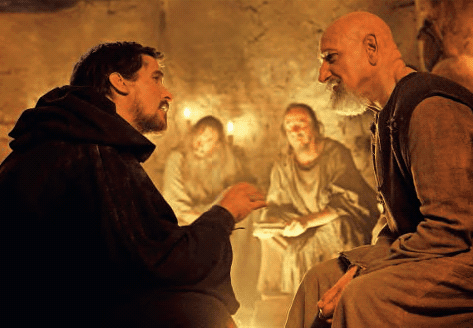 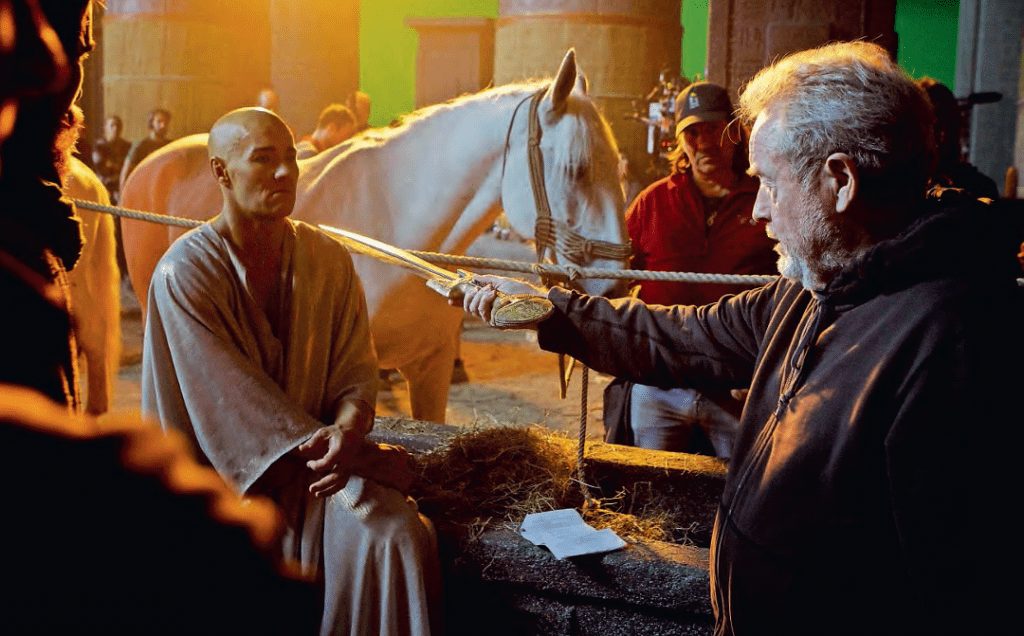 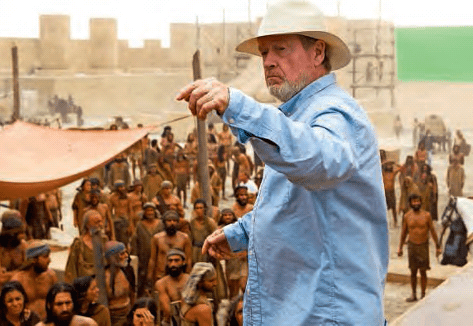 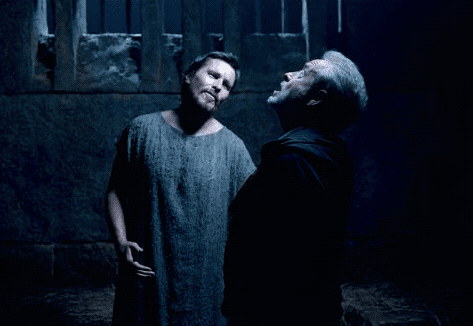 Next, Bale talked to the Philippine Daily Inquirer about the challenge of making the character of Moses accessible for both believers and skeptics:

First, you get over about being asked by Ridley to play Moses. Then you start to realize, can I truly handle a figure as important as this, who means so much to so many people?

Then you have other people, who are absolutely indifferent and who consider Moses to be irrelevant.

And you are going to encounter people who live and die by their religion and who, in a more light-hearted manner, I compare to the first couple of rows in a Shakespeare play. They are reciting lines as you are doing the play. People who know the story backwards will always ask, “Why didn’t you include this piece, that piece?” I feel that we have given the origin story of Moses in this one, this sort of birth of the prophet-to-be.

But you also have people who are going to say, “Why? Why are you making this film? It’s totally irrelevant. What has it got to do with these times?” I think they will be surprised just how relevant it still is, regardless of whether it was a historical fact—that’s interesting.

But to me, what’s far more interesting is the symbolism of what Moses represents, regardless of whether he really existed…

Speaking to The Australian, Bale — who, the article reveals, did door-to-door evangelism for the Jehovah’s Witnesses when he was a child — stands by his recently-publicized comment that Moses was “barbaric” and likely “schizophrenic”:

Bale describes Moses as having passions that are understandable in some cases but adds he also acted in reprehensible, even “barbaric” ways. “Now we don’t get to all that in the film but to me, when I look at a character I don’t think I’m just doing what’s in the film. I go what’s beyond the film, because that’s what gives a life outside of it.”

The “barbaric” term has already caused Bale some grief but that’s the least of it. He describes Moses’s slaughter of 3000 of his own people, some by pouring down their throats the melted gold from the golden calf, as “sadistic in the extreme”. Then he killed prisoners of war but kept virgin girls so they could be used by his soldiers, Bale continues.

“Right, I’m putting him in the International Criminal Court straight away, right?” he notes. “If he hasn’t been taken out by drone strikes immediately.”

Bale is on a roll. His character’s backstory still pinballing around in his head. He asks how would we react if Moses came into our hotel suite, sat down opposite and said he’d just spoken to God.

“He says ‘Yeah, I hear him all the time. And I see him actually. I’m the only person ever. Only person, ever, who’s seen him.’ What are you going to think?” Another rhetorical question.

The reporter also quotes Ridley Scott to the effect that one man’s freedom fighter is another man’s terrorist (which parallels another recent comment of Bale’s):

Only an hour ago, Scott told me Moses was “a dynamo, a generator, fundamentally of freedom. He felt it had to change. In essence, he was a fundamentalist”.

“In today’s world, he’d be pursued by missiles and jets and creamed. Or not. He was very clever, a very good leader.”

Finally, the Italian website Bad Taste has interviews with producer Mark Huffam and co-star Joel Edgerton, from their set visit over a year ago.

The film’s Facebook page has also posted some new photos since our last update: 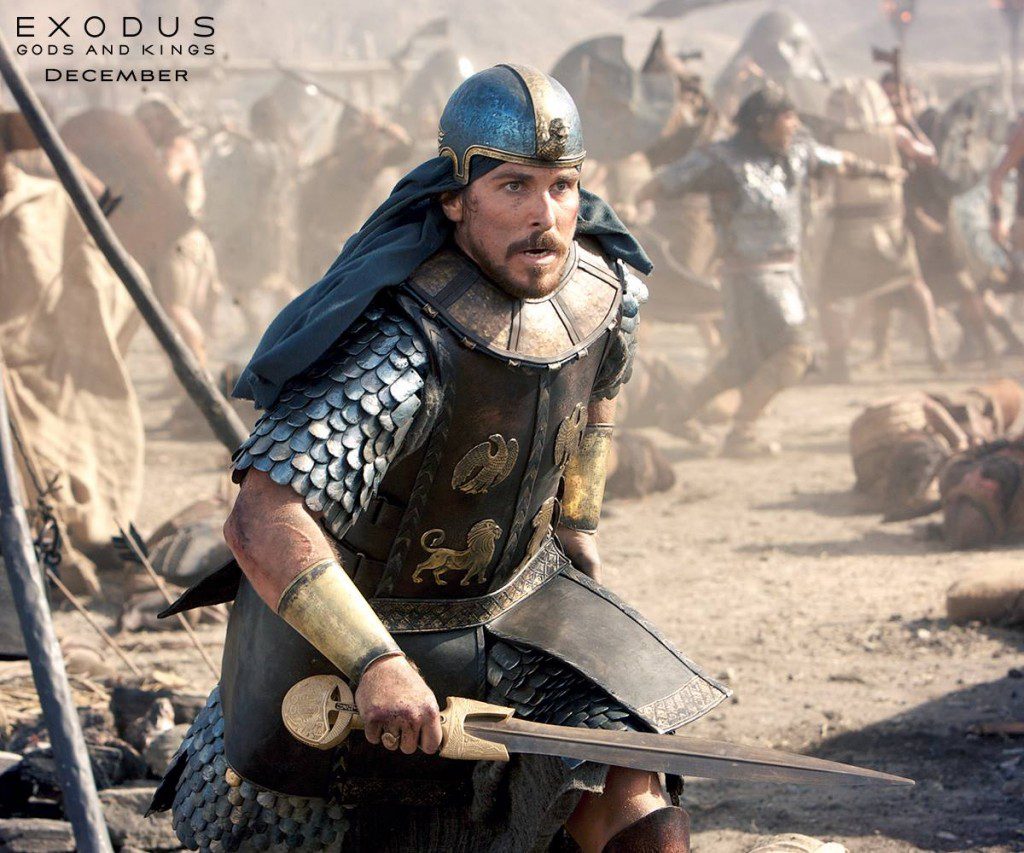 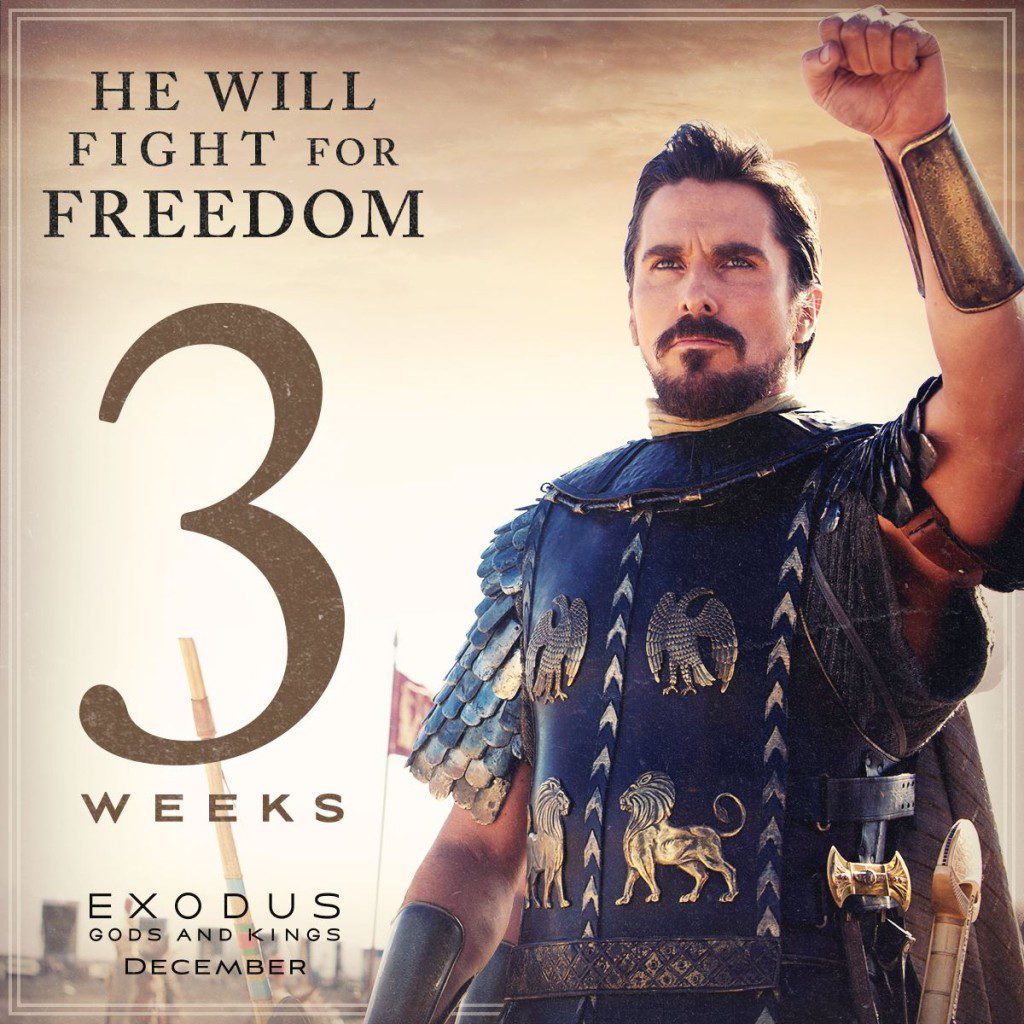 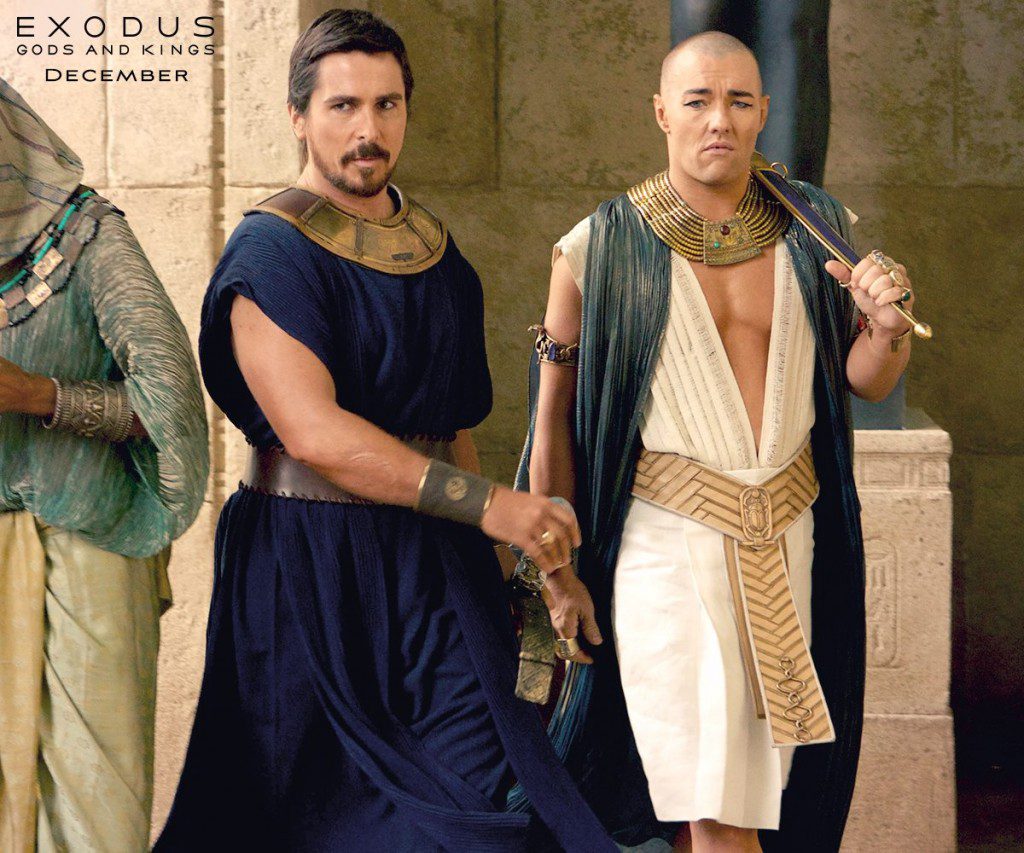 November 23, 2014
Listen: the 'Tsunami' track from Exodus: Gods and Kings
Next Post

November 24, 2014Ben-Hur gears up for its Italian shoot next year
Recent Comments
0 | Leave a Comment
"In 1972, yes. The movie was made in 1956 but the ratings system didn't exist ..."
Peter T Chattaway One of the reasons I do ..."
"And to think... this movie was rated G? It was."
Bishop One of the reasons I do ..."
"John 7:5 states explicitly that the brothers of Jesus did not believe in him, at ..."
Peter T Chattaway The Chosen starts shooting its second ..."
"Thanks. There is a whole other anecdote in between those two verses. Other relatives, sure, ..."
tmirus The Chosen starts shooting its second ..."
Browse Our Archives
get the latest from
FilmChat
Sign up for our newsletter
POPULAR AT PATHEOS Entertainment
1