Watch: A deleted scene and a bonus feature from Exodus: Gods and Kings, which comes out on Blu-Ray tomorrow

Watch: A deleted scene and a bonus feature from Exodus: Gods and Kings, which comes out on Blu-Ray tomorrow March 16, 2015 Peter T. Chattaway

Exodus: Gods and Kings comes out on DVD and Blu-Ray tomorrow, and the studio has released a couple new videos to mark the occasion. Check them out below the jump — and while you’re at it, if you’re a subscriber to Books & Culture, you can also read my review of the film, which appeared in its March/April issue.

CBS News has this deleted scene in which the newly enthroned Ramses asks Moses, rather than his mother Tuya, to be his chief advisor:

And Coming Soon has the following featurette on the mudslide that hits Moses before he has his first vision of Malak by the burning bush:

Also worth noting: the Los Angeles Center for Digital Art has an exhibit dedicated to the digital effects from Ridley Scott’s film. The exhibit began last Thursday and will remain open until April 4. An ad for the event is posted below, and you can see seven photos from the exhibit’s opening night at the film’s Facebook page. 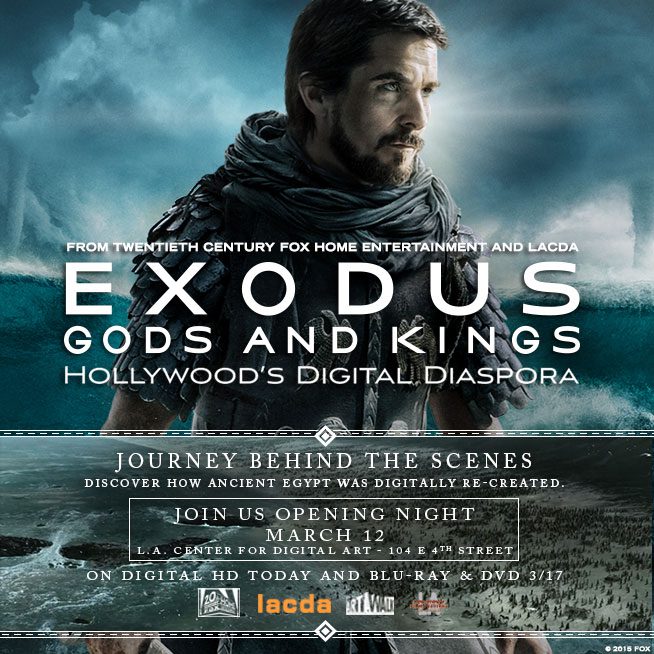 March 18 update: Entertainment Weekly also has a featurette, on the costumes.

And there is this trailer for the Blu-Ray release:

March 15, 2015
The chronological Noah: an illustrated integration of the three origin stories in Darren Aronofsky's film
Next Post

March 16, 2015 Over three dozen new character profiles, and a few new videos, for A.D.: The Bible Continues
Recent Comments
0 | Leave a Comment
"I have neither noticed that much. I recenty read a leadership book inspired from Cyrus ..."
Hamid Mortazavi Cyrus the Great — a Persian ..."
""AD" stands for "Anno Domini", a Latin expression meaning "In the Year of Our Lord".So ..."
Peter T Chattaway The Chosen — season one, episode ..."
"Why does it say at the start of episode 3 that it takes place 26 ..."
Desiree Chamberlain The Chosen — season one, episode ..."
"What about Hellboy, The Grudge, Ghoulies, and Anaconda?"
45th Spiderbob Group VGCP When R-rated franchises go PG-13 …
Browse Our Archives
get the latest updates from
FilmChat
and the Patheos
Entertainment
Channel
POPULAR AT PATHEOS Entertainment
1